Last week was Spirit Week at Little Guy’s school, and it got me thinking about my own high school Spirit Days. I even dug out an old picture…

It was September, 1980-something and it was Spirit Day, one of the biggest days at our school. Every grade was broken into 2 colour “houses” and we would compete with each other to see which house had the most spirit. We built floats and paraded through downtown before gathering in the gym for an assembly.

With the exception of Grade 13 (which was always white house), whatever house you started in, in Grade 9, was your house to defend for 4 years. Grade 9 was divided into green house and purple house – and I was proudly purple. My brother was in his final year, the coveted white house, but had also been a purple house member, so family honour was at stake.

I worked diligently alongside my classmates to put together the Purple House float – our theme was “I Heard It Through the Grapevine”. On Spirit Day, I sprayed my hair purple before donning my brother’s purple t-shirt that said “Purple” in rainbow letters, and extremely bright purple stockings. I even rolled the waistband of my skirt to make it super short to show off my tights. I carried the banner in front of our float, holding on with frozen fingers every time Green House tried to steal it from us. And I tromped through town in the pouring rain, stepping in every puddle, with my head held high. I cheered until I was hoarse. It was awesome.

In Grade 10, our school abolished home room. Instead, the teachers in first period took attendance. It meant that we were a mixture of green and purple (and sometimes other colour houses if there was someone in Gr. 9 or 11). It made it harder to plan a course of action, or talk smack about the other houses. Our spirit waned. Our float suffered. We never lost our voices.

In Grade 11, the school decided to “unify the student body”. They rearranged the houses so that each colour house was a mixture of all the grades (except Gr. 13). No one was happy about it. The Grade 12s didn’t want to mix with the Grade 9s, and vice versa. Petitions circulated. The Student Council received angry letters. The administration retaliated by ignoring the pleas to change it back. And then they did the unspeakable – they cancelled the parade. Even though I was not present in the school that year (I was homeschooling/doing correspondence because I was pregnant with Big Guy), I could hear the betrayal and sadness in my friends’ voices.  Those that were removed from their former colour houses lost their sense of identity. Our spirit faded.

The next year, those of us in Grade 12 finally had our spirit crushed. Since Grade 13 was being phased out, those who were heading to college would not be returning for that 5th year. And many of us, myself included, would be completing Grades 12 & 13 in this final year. Therefore, we argued, that should be allowed to join the coveted white house. White house, however, strongly disagreed. So we tried to start a rival house – black house. Somehow the school administration caught wind of our plan and the word spread quickly that anyone wearing black on spirit day would be suspended, jeopardizing graduation.

In defiance, I wore jeans, a white t-shirt, and a black jacket to school that day. The “head bangers” who always wore black, didn’t even bother to show up. Most of us did not attend the Spirit assembly or the dance.

The administration had also lost its “spirit”. It had forgotten that Spirit Day was about making noise and having fun. Instead they succeeded in unifying the students in only one way – its unhappiness with the structure surrounding Spirit Day. The next year, it was officially over. Still, I will never forget our fierce determination to be the loudest and proudest in Grade 9. Purple forever! 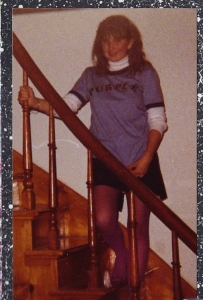 It snowed yesterday and I have to confess – I got a little excited about it. Just goes to show that my mental health status is precariously balanced between sane and insane. Maybe what I need is a little spirit. A little goofiness at work. A reason to dress outrageously, act crazy…and go to work like that.

This week was Spirit Week at Little Guy’s school, and I was a little jealous. Monday was Moustache Day but I didn’t find the note until it was almost time to run out the door. But we put our heads together and came up with a quick solution: 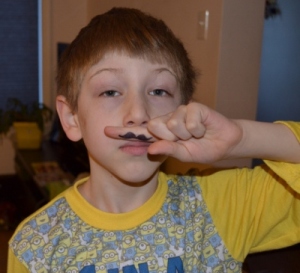 Tuesday was 80’s day. I could so rock the big hair!  We had no neon in the house…or leg warmers, parachute pants, acid wash jeans or big shoulder pads, so we improvised:

It was worthy of one of these!

Wednesday was Super Hero day! Do you have any idea how hard it is to stuff a cape into snowpants?? 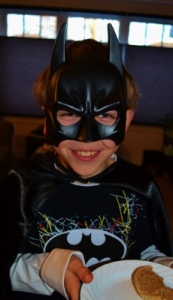 I’m pretty sure that if I showed up at work dressed like Wonder Woman, my bosses wouldn’t be impressed. Nor would their wives. (Let’s be honest, nor would anyone over the age of 5).

Of course, it could be worse. One of the pastors could dress up as Wonder Woman too! (*shudder)

To round out the week, Little Guy had Twin Day which is a bust if you don’t have a friend to coordinate with, and today is School Shirt/Colours, which is kind of boring.

What if adults had “Spirit Week” at work?

Personally, my first vote would be for Pajama Day. Or Hollywood Movie Star day (like I need an excuse to wear velvet and gloves). I’ve accidentally done Mismatched Shoe Day at the office…and I’m one night’s sleep away from Mismatched Everything Day.

There are lots of possibilities:

Backwards Day (great way to get your panties in a bunch!)

Dress Like an Olympian Day (would a toga work here?)

Dress Like an Animal Day (I’m not touching this one…)

Sports Team Day (Can I be Sporty Spice?)

If you had a Spirit Day at work, what “theme” would you vote for?