It’s summer and to start it off, Canada celebrated its birthday. Mostly without fanfare because we are all staying home. Which will also mean fewer road trips this summer.

BUT you can still experience the great Family Road trip right at home. Just pile everyone in the car in the driveway for a few hours. Once the heat threatens to overwhelm and the electronic devices are dying, throw in a cd for a fabulous family sing-a-long. I can recommend just about anything by the Arrogant Worms. Our favourite album is Live Bait, released in 1997, and in honour of Canada Day, this Friday’s Tune is Canada’s Really Big…the classy orchestral version!

Tea is the second most popular beverage in the world, Apparently, from shore to shore, Canadians are drinking more tea, says a 2016 Coffee Association of Canadian survey and a 2013 Nielson study found the average Canadian has 8 different varieties in their pantries. I have over 55. With tea boutiques selling loose leaf in a range of flavour combinations, popping up in cities across the province, and retailers stocking their shelves with more, it’s not hard to do.

So in the spirit of tea and country, I shared a pot of Canadian Breakfast tea with my Mom…in the afternoon…even though it was 33C degrees…in the shade (only 46C with humidity). No heat wave will ever spoil a tea party, especially one for Canada’s 151st birthday!

Canadian Breakfast tea is just one flavour offered by Nourish Tea Co., a company that believes in providing organic (as much as possible) and supports estates that are sustainable, ethical and abide by fair labour practices. Canadian Breakfast tea is an orange pekoe tea from Sri Lanka, and is Kosher, Organic, and Fair Trade Certified. It had the robustness expected of a “breakfast” tea, with it’s own unique malty flavour that can be intensely satisfying at any time of the day. This particular tin was a gift, and it can be purchased at well.ca or on Amazon.

In my (tiny) bit of research, I discovered a new tea company, Canadian Boreal Forest Tea Co. operating in Manitoba. Apparently it produces a handful of blends using pine needles, sage, sweetgrass, rose hips, fireweed, and barks, grasses and clover all found in Canada’s boreal regions.  It is devoted to respecting the land providing this bounty. That may not be a uniquely Canadian perspective, but it’s certainly one I could support. They only sell wholesale now, but I’ll keep an eye for them!

Whatever the reasons, Canadians are setting aside their double-doubles for tea (perhaps it’s our long, cold winters?) – I’m in!

Please welcome a Guest post from my very own Little Guy!

This summer, I took Little Guy to an art gallery to (hopefully) see some paintings by Tom Thomson because Little Guy had written 2 school papers on the artist and his contributions to Canada’s identity through art. Not only did we see an exhibit of Tom Thomson, we also saw Lawren Harris (Group of Seven) and the Group of Seven Guitar Project. Unbeknownst to us, the gallery also owns Tom Thomson’s cabin. I think it was the highlight of Little Guy’s trip!

Thomas John Thomson, or Tom Thomson, was an important Canadian artist. Tom inspired many, including a number of those in the famous Group of Seven, who were his friends. Tom, because of his unique Canadian landscapes, is considered a significant person to Canada because he shaped the way people thought about Canada through his art.

The Life of Tom Thomson

Tom’s parents were Margaret Matheson and John Thomson. Tom’s family moved to Leith two months after he was born, a place near Owen Sound. Tom was the sixth of ten children in his family and grew up on Rose Hill farm.

Tom liked to draw and fish, and he grew up with an appreciation for music and literature. Tom’s father was a naturalist. Tom went to school locally with his nine other siblings.

In 1899, Tom tried to enlist in the army to fight in the Boer War in Africa, but he was turned away, so he moved to Seattle to study at the Acme Business College, which his brother co-owned. After college, he worked as a graphic designer, then he moved to Toronto to work as an engraver in a big company, but he hated being indoors. Then. he got a job as a designer at the Grip Limited. He made friends there and they often spent Sundays sketching together in the country. They taught him more about mixing oil paints and drawing landscapes using lines. He also took courses at what is now the Ontario College of Art and Design in Toronto.

Dr. James McCallum loved the outdoors and was a landscape art collector. He learned about Tom from Lawren Harris and James MacDonald. He offered to pay Thomson’s expenses for a year which allowed Thomson to quit his job and become a professional painter. Dr McCallum also introduced Tom to A.Y. Jackson.

In 1912, Tom went camping and canoeing at Algonquin Park went with some friends, a suggestion from his friend, Tom McLean. Tom fell in love with the wilderness in Canoe Lake. They paddled from Canoe Lake to Tea Lake and camped near a dam where the logs ran through.

By 1913, Tom’s friends, including Lawren Harris, James MacDonald, Arthur Lismer, and A.Y. Jackson (part of Group of 7), were discussing how to promote national art for Canada. Canada had become a new nation in 1867 and the artists wanted to celebrate the country’s natural features and grow pride in Canada. 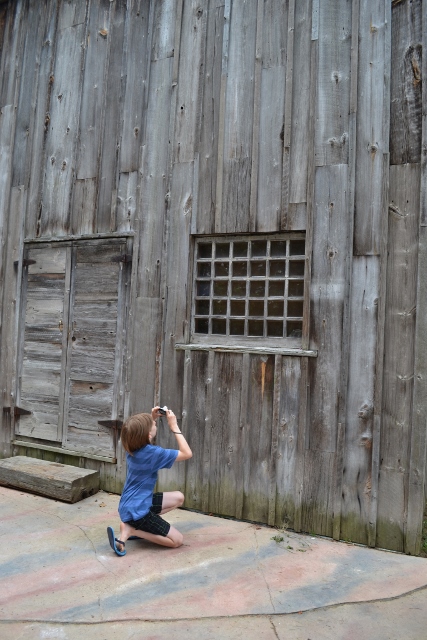 Tom died on in Algonquin Provincial Park, Ontario on July 8, 1917. By this time, he was living there 3 seasons of the year; he spent winters in Toronto. Tom had gone out fishing and his empty canoe was discovered the next day. His body was found a few days later. He was buried in the Canoe Lake cemetery, but the cause of his death remains a mystery. Some believed he was murdered, while others believe he drowned. His family had his body exhumed and buried in Leith, but in 1956 some men dug up a body in Tom Thomson’s grave. Some believe his body was never sent to Leith. The skull was last examined by some forensic experts in 2010 and they believe that it does belong to Tom Thomson, but they can’t do any more tests unless the family agrees. The mystery of his death helped him remain popular as an artist. Even the group Tragically Hip have written a song about Tom’s fiancee, Winnifred Trainor.

Tom developed a practice for making major paintings, and used it. Once, on his third trip, Tom took a camera but he quickly ran out of film. Tom usually sketched the landscape, and would paint it later when he had more time and supplies. He used bold colours and often used the perspective of sitting in a canoe.

Part of Tom’s style of art, was mixing colours to create new colours, and certain brush strokes too. Tom’s style of art made his artwork very recognizable. Tom’s art was also often non-traditional and bold, painting very unique scenes from Canada. He developed his own unique style that quickly became well recognized. Some of his famous paintings are The West Wind (1917) (shown left) and Jack Pine (1916-1917) (shown right). 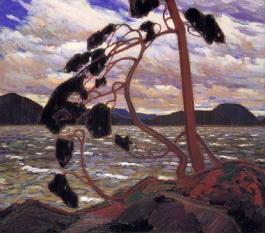 It was shortly after his death, that his friends joined together to become the famous Group of Seven. They focused on showing Canada’s rugged northern wilderness. Currently in 2017, there are eleven people inside of The Group of Seven. A public school ( in Ontario ) and an art museum, ( in Owen Sound, ) were named after Tom Thomson in memory of him.

Take everything as it comes; the wave passes, deal with the next one. – Tom Thomson

Tom succeeded in becoming a Canadian legend for his art style. His artwork has inspired many artists. In 1990, a group of artists created postage to honour Tom Thomson. Tom’s friends in the Group of Seven, were, and still are, the most famous Canadian artist group. Tom accomplished in helping to create the group of seven. Tom is an important Canadian artist, because of his creativity, and influence on how others now see Canada.

Posted by jennsmidlifecrisis | Filed under Photography

The creation of a thousand forests is in one acorn. -Ralph Waldo Emerson

Every Canadian child will be taught about the battle of Vimy Ridge, which history marks as an iconic milestone in shaping Canada’s national identity. I think it’s important for our kids to know the parts their country played in those two world conflicts, and the costs. I have shared my family’s story with my kids because I want them to understand the personal cost. After the war, our world had to learn to reconcile our differences and strive to build a better world for the next generation.

This weekend, my aunt share a story that has been a 100 years in the making!

In 1917, following the battle of Vimy Ridge, Lt. Miller went for a walk on the battlefield, and gathered a handful of acorns. The regal oak trees he had written about seeing all over France, were destroyed. He sent those acorns to his family in Canada and asked that they be planted. Two years later, he returned home, married his sweetheart and started his farm, Vimy Oaks. The small acorns were starting too.

In 1950, a random veteran saw the farm’s sign and decided to make inquiries. The two veterans of Vimy became fast friends, often working together on Miller’s farm. Miller, not having children of his own, enjoyed the company of the veteran and his boys. After the farm was sold in the 1960’s, one of the boys, Monty, continued to visit the Millers. Lt. Miller passed away in 1979 at the age of 90.

In 2004, Monty took his wife to Europe to retrace his father’s war experiences and visit the Vimy Memorial. He was struck by the bare landscape, and he started to think about the Oaks at the Farm.

Ideas are acorns. They’re only powerful because that acorn becomes an oak tree. – Bob Clemans

By 2014, the oaks were 10 metres high. With the help of the Vimy Foundation and a local nursery, shoots from the acorns were grafted onto root stock from British Columbian oaks. But the process to certify them for transportation to France was too complex.

In the Summer of 2016, Monty and his grandchildren gathered acorns from the Vimy Oak grove. They were taken to a nursery in France, where they were germinated and continue to grow. Meanwhile, with the help of donations, a small parcel of land has been purchased near the Canadian National Vimy Memorial, and once it has been de-mined in 2018, the tiny oaks will be planted. Beauty after the battle.

May our children, like these acorns, grow tall and strong and steadfast,
and may they always know peace.