The challenge: This week, share an image of a finishing touch from your own life. Show us the detail that made a good experience a truly transcendent one!

This Summer, Big Guy drove down in the night and suprised us in the morning. We spent the rest of the weekend, playing games and playing in the pool (I got thrown in twice…) 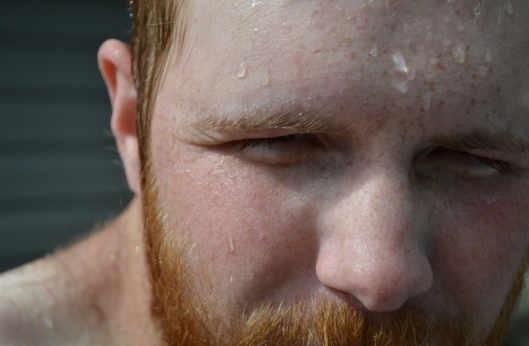 Big Guy tried to give me a wet hug…the camera saved me.

Last night, I took Little Guy and my camera to the park to work on our “ninja skills” (of which I have none). Little Guy even pushed me on the swing…and I took his picture over my shoulder.

Time with my boys is always a “Cherry on Top”!

"I have failed as a mother", boys, family, humour, raising boys

One of my favourite bloggers, Coach Daddy, recently had a guest blogger, Tiffany (Sounds Like Life to Me), who wrote about raising a teenage daughter. I laughed through most of her post because I could sense her frustration (while still finding the humour in it). And then I sighed a little… I have 2 boys! They are not only unique individuals, they are also 16 years apart, which means the “mean, lean teen” stage will have been in 2 completely different decades. Big Guy hit “teendom” in the early 2000’s, while Little Guy has literally been counting down the days to double digits! I survived those years with the first kid, but I’m not overly optimistic about the second. Time will tell!

Before I begin, I should make this disclaimer – both of my guys are amazing, and I wouldn’t trade them for anything. They have, at times, graciously filled my longing for a daughter by:

-watching some of the “girly-er” Disney movies with me; and,

Girls are notoriously stereotyped as “Drama Queens”, and boys are sullen and disengaged. Right or wrong, thinking back, most of the sullen “attitude” from Big Guy related to only 2 areas:

I was never a big stickler when it came to keeping his room clean. I rarely made him make his bed because honestly, I rarely make mine! It doesn’t seem fair to impose regulations that I’m not willing to keep. If I could drop off his clean clothes on the bed without impaling myself on Lego blocks and miniature plastic soldiers, I was pretty happy. From time to time I’d request that he sort through piles as, like his Grandfather, he liked to keep everything because he “might need it some day”.

Just before Little Guy was born, we renovated our basement and set Big Guy up in his own “pad” – part bedroom/part work space/part video game space. But the older he got, the worse that room became. Suddenly garbage couldn’t make it into the can – literally centimeters away. Stinky socks and moldering t-shirts littered the floor, along with hunks of cardboard and scraps of paper so twisted and mangled that no content would ever be decipherable again. And let’s not forgot the odd assortment of sticks, rocks, beer bottle lids, and assorted “parts” that he’d scoop up on his walk home from school every day (he still hasn’t lost that little boy desire to pick up useful garbage stuff along the way).  He was forbidden to have dishes in his room because I would never have found them again. I seriously considered making a “survival” video entry for a contest with Survivorman.

Every now and then, fearing for my life yet armed with plastic bags and bug spray, I would pick through what I dared. Anything I thought he might honestly need was piled on his bed for him to deal with before he could sleep there. At least once, I caught him sleeping on his futon instead.

Sadly, this overwhelming neglect to the general tidiness of his “home” has never left him.

Homework does cause brain damage…at least in mothers! I spent Grades 6-12 working full time to get him through school (you should have seen the looks on teachers’ faces when I showed up for meetings with my packed 4” binder!). Yes, he had some learning issues and the schools were not always as supportive as they could have been.

IF he had used his agenda to organize his scattered brain by actually writing down his homework, and then checking it before he left the building to see that he had it, well…it would have helped! Handing in his homework was another problem. Not losing his homework, still another problem. Arguing less about the validity of the homework would have saved time (and brain cells), not to mention the time wasted looking for things like pencils…that were literally. Right. There.

The questions, the phone calls, the notes were usually met with eye rolls and unintelligible grunts, but on the night he handed me his high school diploma (he skipped graduation much to my dismay), I was “like those who dreamed. Our mouths were filled with laughter, our tongues with songs of joy” (Ps. 126:1b-2a) and I slept deeply.

There were never issues with curfews, friends or activities. He wasn’t interested in clothes. He liked girls, but was too shy to let them know it. Emotionally, we both had a lot going on in our lives, so in many ways, I think we banded together to “survive” rather than turning our backs on each other. And we did survive!

Today, Little Guy is officially double-digits, and is heading into “teendom”. Boy, O boy! Am I in trouble!   I’m not sure I have the strength to do it all again. Picking up after himself, homework, and wearing winter clothing have already become issues. There have been eye rolls and inaudible grunts. And there have already been meltdowns and tears (and they weren’t all mine)!

Lord, help me to see the light at the end of the tunnel…and may it not be from the opening of a cemetery plot. Amen!

I stood over the sink this morning, sipping my tea and watching the steam roll off the Mickey Mouse bed sheets on the clothesline. It all started a slow-moving train.

I bought those Mickey Mouse sheets when Big Guy was 7. We had just moved into our apartment and I really wanted to make Big Guy’s new room special, but we didn’t have much money. I settled for sheets and matching curtains. Those same curtains just replaced the jungle animal curtains in Little Guy’s room.

Change can be good. Change means maturity, knowledge, beginnings. Change can also mean endings. We recently removed the foam jungle animals with googly eyes from Little Guy’s room; I had painstakingly put them together to decorate the nursery. This week we exchanged all the superhero and Transformer socks for plain socks. We packed up the Snuggle Puppy book to make room for Captain Underpants books. The Tooth Fairy visited again. And Big Guy…he moved out 4 years ago this month…

Boys do not grow up gradually. They move forward in spurts like the hands of clocks in railway stations. – Cyril Connolly

…I’m not ready. I don’t even know what I want to be when I grow up…