Birds, the topic of Cee Neuner’s Fun Foto Challenge this week, are something I have photographed a lot over the years. And all kinds of birds too – Early Birds, Really Early Birds, Cardinals, Ducklings, even recently, a Hawk and an Osprey. But when I saw this was the challenge, 2 cheeky moochers immediately popped into my mind.

Could you resist those faces?


Every day may not be good, but there is good in every day. Don’t forget to play!

This is my post for Cee Neuner’s Fun Foto Challenge: Pail or Pale


It’s called the “golden hour”. The light at sunrise and sunset washes the sky and landscape in a rosy hue that is unmatched by any other light source.

I have always been of the opinion that if I was meant to see sunrise, it would be later in the morning. But I have ventured from my cozy bed on 4 occasions (that I can rememer): At the riverside cottage with the geese, the beach, Thanksgiving at my folks, and Christmas morning. Most of the time I stick to Evening (Night photography is still a great challenge to overcome). This Fall I ventured to the edge of the corn field and the neighbour’s lawn at my folks. You can’t shoot great sunrises or sunsets living in the suburbs of a city.

For Cee Neuener’s Fun Foto Challenge this week, she asked for Sunset to Sunrise. Rather than posting a bunch of photos again (though the text in blue above should open some previous posts), I chose two favourites: an older sunrise and a new sunset.

This Labour Day weekend, Big Guy posed for me, and Dad and I both tried to capture the image I had in mind. We came close…

This may not be the best sunrise, but it’s one that takes me to my happy place. Right now, it’s the best way to travel. Happy Wednesday!

Its a great big place, full of nothing but space
And it’s my happy place

I don’t know about you, but nothing screams summer like the beach! 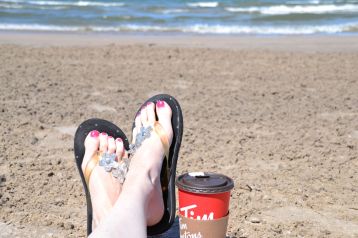 This is my post for Cee Nuener’s Fun Foto Challenge: Summer Scenes.

I’m gettin’ bugged driving up and down the same old strip
I gotta find a new place where the kids are hip
My buddies and me are getting real well known
Yeah, the bad guys know us and they leave us alone
I get around! – Beach Boys, I Get Around

This is my post for Cee Neuner’s Weekly Fun Foto Challenge. This week the theme is Cars & Trucks.

Man cannot live by bread alone; he must have peanut butter. – James A. Garfield

Peanut butter cup tea is inspired by the sweet, rich (and might I add), deeply satisfying delight. Whether as a sweet after a meal, an afternoon snack, or just because, this tasty tea infusion hits the spot. It is a blend of apple, cocoa bits, almonds, chocolate chips, and safflower.

What? No peanuts? That’s right.

As you can see, the colour is a pale yellow, which surprised me a bit. I was expecting a darker colour. The flavour, however, had the toasted nut flavour I was expecting. I would have liked the chocolate to be more prominent (being a natural choc-o-holic), and like chocolate pb cups from the store, I thought it was missing some salt.

Still, with only 5 calories per cup, it’s a guilt-free treat so I can wear my bikini without anyone calling Greenpeace to roll me back in the water…when it’s warm enough to wear a bikini, that is!

Now, if someone would just make an O Henry tea!

Summer afternoon—summer afternoon; to me those have always been the two most beautiful words in the English language. – Henry James

Sunrise. On the last day of vacation. Really? The last to sleep in. The last morning at the cottage to pad around in my pjs and eat a leisurely breakfast, before packing up to head home.

I’ll be honest. It was hard to roll out of bed. When Big Guy came knocking on my bedroom door, the temptation to just. not. move. was overwhelming.

It was rather cold and I hadn’t packed warm clothes that were warm enough.

But the sight from the dock was breathtaking.

Drink deep in the morning, see what the day will bring. – Skillet, American Noise 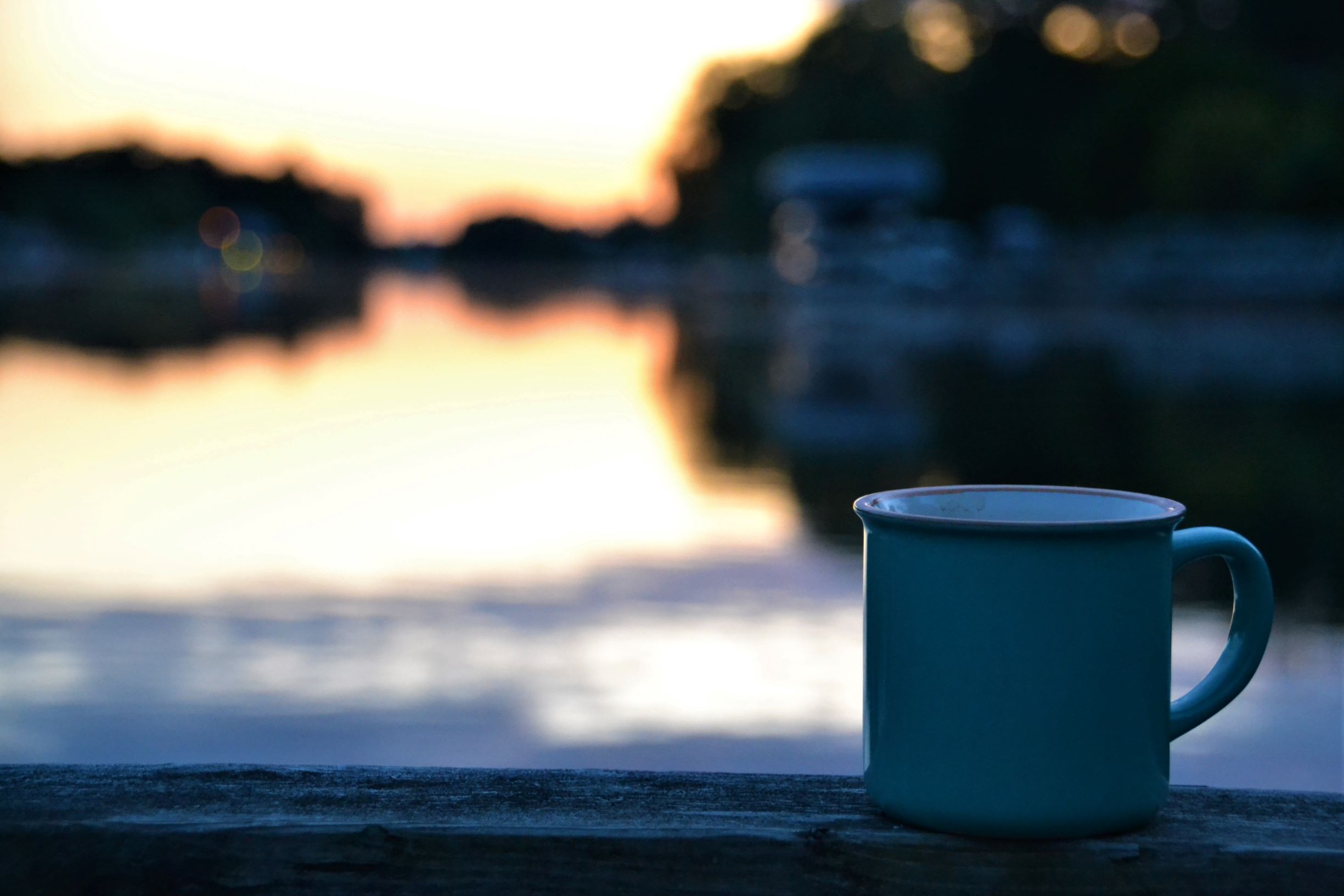 Earlier in the week, Big Guy and I headed to the beach to watch the sunset. I’ll share those photos later this month.

Have you ever wondered what the beach looks like at 7 a.m.? I’ll show you on Wednesday!

This life could almost kill ya
When you’re trying to survive
It’s good to be here with ya
And it’s good to be alive
-Skillet, Good to Be Alive

Now go put the kettle on. Take a deep breath. Have a Happy Monday! 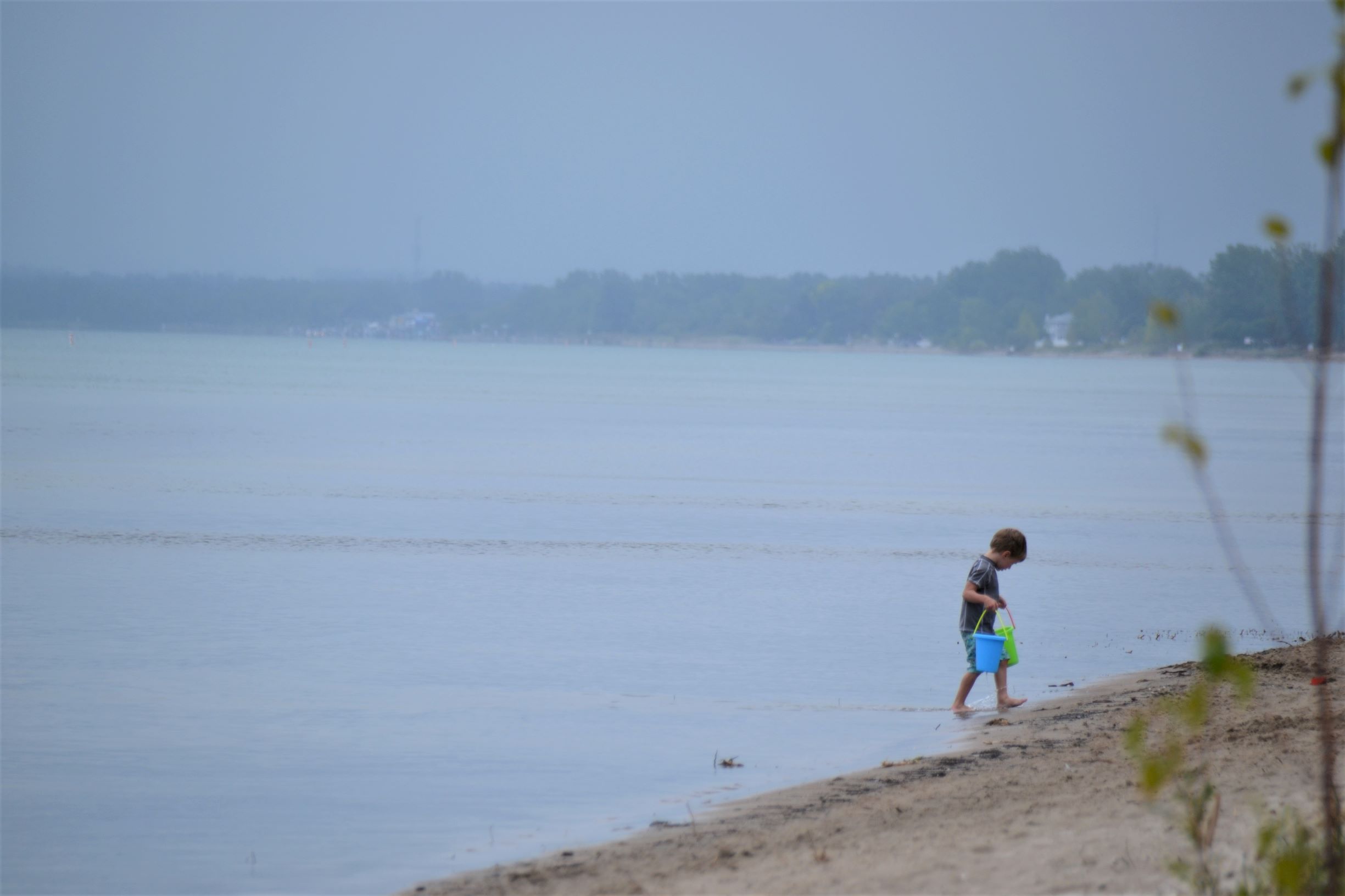 A rainy day at the beach is better than a sunny day in the office.

I look my best when I’m totally free, on holiday, walking on the beach.
– Rosamund Pike

Of course, Rosamund Pike is a blonde, almost 5’9″ actress who could look her best wearing a hazmat suit in the middle of a garbage dump. And sadly, a number of the woman I saw at the beach last week would have looked more attractive in a hazmat suit rather than the skintight shifts and stringy ensembles I saw. Those sparkly and stretchy bikinis would be flattering on Rosamund Pike, but not so much on Roseanne Barr. If I sound judgmental, I probably am, and for good reason. There was a lot of flesh on that beach. Mine included. I had had high hopes for a beach-ready body…in January. But as we all know, the “road to hell is paved with good intentions”. And I didn’t quite make it.

Even Castles made of sand, fall into the sea, eventually. –  Jimi Hendrix

So…last year I decided that if I’m going to wear a bikini, it has to be now. I bought one and I wore it…once. This year, feeling less confident, I braved the humiliation and bought a new suit. And I wore said suit to the beach…twice. I even hinted to Hubby that he should take my picture (digital cameras make it easier to “erase” the record of “horrors”). Based on his reluctance, I’m guessing he thought it was a trap!

But on our last trip to the beach, I started to wonder if I’d regret not wearing it, just once, to the beach. I mean, I wore it in the canoe, covered fully by shorts and a tee. After all, I had already “lit the beacon for Gondor” with my pasty white skin. Green Peace was not called. No one was blinded. Children were not traumatized. The Earth didn’t cease to spin.  And I had already seen some suits of all sorts on, well…on all sorts, so I to braved it. With a skirt wrap. Let’s not be ridiculous!

As for the photo, I’ve decided to keep it. But…

…retain some semblance of dignity)!

We all have hourglass figures; your sand just settles in different places.
– Octavia Spencer