Watercolor is a swim in the metaphysics of life… a mirror of one’s own character. Let it be unpredictable and colorful. – Anonymous

Samuel Radford was listed in the 1861 census as a ‘flower painter on china’ at the age of about 17.  He was employed in the early 1870’s, and by 1881, was listed as a china manufacturer, employing 77 people. He started manufacturing his own china  by 1885, in High Street, Fenton.

The Radford factory made elaborately shaped and beautifully decorated teaware which sold throughout Europe and North America. The company passed to Samuel’s eldest son William and in 1931, was sold outside the family. It ran, with breaks during the 2nd World War until the mid 1950’s. The factory was demolished around that period, bringing a close to another era in potting history. 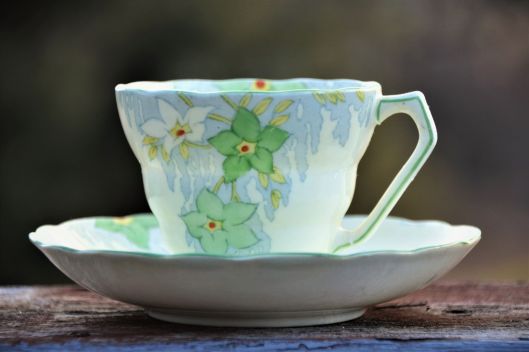 This teacup, circa 1928, is an early Art Deco style. Art Deco (1920-1950) was an amalgamation of  different decorative influences including neo-classical elements, cubism, and Art Nouveau.  Art Nouveau (1880-1920) had a lot of stylized botanical motifs, most commonly flowers. I love the pattern on this teacup because it reminds me of a watercolour or acrylic painting, like a stylized Claude Monet. It makes me think of water lilies.