We remember.
Not just because it was world history or national history…but because it’s personal history.
In my small hometown, everyone knew someone who had fought in the Great Wars. For my family, it was my great uncle. I have shared this story before, but every time I think about it, I am astonished again and again, that love and compassion never died.

My Great Uncle was killed in action in 1944 – but it is the letters from “the enemy” that make this a remarkable story.

My Great Uncle was born in 1924 and enlisted in the Canadian Army Dental Corps in December, 1942. He needed his parents’ permission to join because he was only 17. He re-mustered to the Royal Canadian Air Force in 1942 and headed overseas to the United Kingdom in August 1943. He was attached to the Royal Air Force and went missing in action in 1944, at the age of 20.

It was several months of agonizing waiting before his family found out what had happened. My Great-Uncle had been the rear gunner in an Avro Lancaster went missing during a night operation in France. The rear gunner was in a “bubble” on the underside of the airplane. I was with my Grandfather when he toured the inside of an Avro Lancaster a few years ago, and he kept remarking over and over how tight the space was for the rear gunner. My Great-Uncle had been over 6′ tall.

Most of the crew members, all R.A.F., were also killed. The other crew members were Canadian – one was taken as a Prisoner of War, and one escaped with the assistance of the French underground and returned to England.  The POW’s report stated that the plane was heading to its target and came under heavy fire. They barely missed colliding with another Lancaster that was on fire. Shortly thereafter, a fire broke out inside the plane. The pilot sent others to assist with the fire. When the controls burned out and the plane started into a vertical dive, he forced himself out of the window with a parachute. He woke up on the ground with a broken leg and cracked skull, and was captured by the Germans.

Shortly after the war, the first letter arrived from Germany, from the medic who had attended my Great-Uncle following the plane crash.

Dear family R.,
perhaps you will ask yourself why I wrote to you. I had so many addresses that I had unfortunately to destroy. But I guarded your address like a sanctuary, for a great sympathy united me with your son. In your son I saw a Canadian sportsman, he reminded me of the ice-hockey games Canada Germany in the Berlin sport-palace. And so I am very glad that I can give you any information. It was permitted me to return home after a military-time of long years and an imprisonment of one year, where my young wife awaited me. On the 30th of January my little boy has his first birthday. He is giving us very much pleasure, and so we forget many a trouble and sorrow that oppress us deeply today. I now hope that these lines will give you a small consolation in your grief, and we should be very glad to hear from you again. We should like to send you the pocket-lighter, if you want. We send you the kindest regards, Yours very sincerely, E. P. and family.

My Great-Grandparents wrote back, and received this second letter:

Dear Family R.
By your dear lines I now have the confirmation that you are the parents of Mr. R. I thank you very much for the nice letter, and I am very happy that you call me your friend, and in this friendship I want to report you truly everything what I know of the death of your son. In June 1944 we had our airfield near the village … in northern France. On the 24lb June 1944 at about 23 hours, a heavy air attack ensued on our anti-aircraft position and the neighbouring V-position. At this raid German night-fighters were put in, and in a few minutes a heavy airbattle developed in the nightly sky. In the course of this battle the bombing aircraft of your son must have been heavily damaged. After the air-battle I got the order to search the near environs for the dead and injured persons, and there I found your son. He was lying alone about 300 m from our position, and as I still remarked weak signs of life I called for medical assistance, but it was all in vain, with low words I could not understand, unfortunately, your son died in my arms. My thoughts were in his native country with his relatives. We had became comrades; for tomorrow already I could have had the same fate. So I closed the eyes to your son and said: May God give you the eternal rest. I suppose that your son died by the consequences of the inner injuries he got by the fall. The parachute had taken fire and was not opened, the occiput[sic] had a small injure. The next morning I had to take off all the things of the dead persons and must give them to a German burial-commission that had to send them on to the Red Cross. Therefore I am very much astonished that you did not received the last things of your son. On the 26th June 1944, we brought your son to his last place of rest. He is lying with other comrades on the churchyards “…”. I am going to mark the place for you by an enclosed sketch. I assure you that we buried your son as well as every German comrade. A plain cross of wood with name, day of death and number of recognition adorns his soldier-grave. Herewith I also want to pronounce my sincerest condolence to you.

Some time following this letter, Mr. P. visited my Great-Grandparents and returned a few of my Great-Uncle’s possessions. I find it remarkable, that in a time when tensions still ran high between different nations, that this medic reached out to a small farmer’s family in an attempt to bring them peace.

My Great-Uncle’s fiancée never married. Nearly every year my Grandfather would attend the Remembrance Day Ceremony on November 11th, and the cenotaph in town…to remember. Grandpa would touch his brother’s name on the cenotaph and leave his poppy at its base.

We took him to see a Lancaster bomber in the early 1990s. Grandpa walked around that plane several times before we went inside. Over and over, he’d shake his head and mumble “isn’t that something”. It wasn’t until we moved to the rear gunner’s position that he started to share. “My brother was really skinny and over 6′ tall. How could he possibly fit in there?”, he chuckled. “He would have had his knees in his face”.  Then his smile faded and his eyes welled with tears. He looked at me and tried to say something but he was too emotional, so we just held a quiet memorial there, before he commented “isn’t that something” and turned to go.

My Grandpa is gone now, but his family, we will always remember… 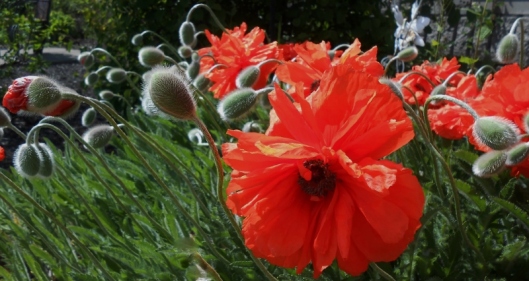 “You have heard that it was said, ‘Love your neighbor and hate your enemy.’  But I tell you, love your enemies and pray for those who persecute you, that you may be children of your Father in heaven.” -Matthew 5:43-44a

1 thought on “Letter from a German Medic: We Remember”