I remember making doughnuts with my mother and grandparents. My job was to cut the holes or to watch the doughnuts frying in the oil and let Mom know when they were ready to be rolled. We called the tiny doughnut holes, doughnut buttons.

It was a tradition I wanted to share with my boys. This weekend,  my mother and I got to share it with Little Guy. First, we let him measure and mix the dough.

Next we rolled them out and he cut them with the same tools I had used as a kid – a drinking glass and a thimble. 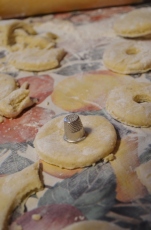 Finally, we fried them in oil in a fryer. As a kid, we used an electric frying pan. This was a lot safer! 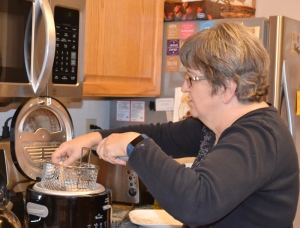 My Great-Grandmother’s recipe said “Salvation Doughtnuts”. Apparently, these doughnuts were first made by Salvation Army volunteers in World War I. They set up service huts in abandoned buildings near the front lines where they could serve the soldiers baked goods.

The best part is eating them warm. The next day I made Jelly Busters, a yeast-based doughnut that requires a lot of time to prove the dough. Otherwise the process is the same.

And once they’re cooled, we add apple jelly inside, and sprinkle icing sugar on top. Just like when I was a kid…

I miss my Grandparents, especially as the holidays get closer. So being able to share this family tradition with my boy was really special and I hope we created special memories for him.