There’s a long time to go before Christmas comes again. It already feels like it was a long time ago. Except for me…Nearly every work day in the last couple of weeks has felt a little bit like Christmas.

I have an awesome boss (no, I won’t get a bonus for saying so in public), who has been sharing his (or his wife’s) David’s Tea Advent Calendar! Nearly every day, mid-morning, he will announce “it’s tea time” and press the button on the office kettle. Then we gather around the big box like little kids to see what’s on the menu today.

There is a great deal of poetry and fine sentiment in a chest of tea.
– Ralph Waldo Emerson

Day 1 – “Let It Snow” is a green tea with candied pineapple, black currants, apple, white chocolate chips, clove & cinnamon, and sweetened with stevia. The caffeine level is low. Unlike many flavoured green teas, the predominant flavour was the apple. The cloves and cinnamon also gave this tea a very pleasant “seasonal” taste.

Day 2 – Chocolate Macaroon sounded like my kind of tea. It’s a black tea (medium caffeine) with toasted coconut, pecans, cacoa, and sweetened with rock sugar. It was silky like a cup of hot chocolate; you could really taste the toasted coconut too. My only suggestion was that it needed a hint of salt to make it taste just like a macaroon. It contains 10 calories per 240 ml (3g carbs, 2g sugar) 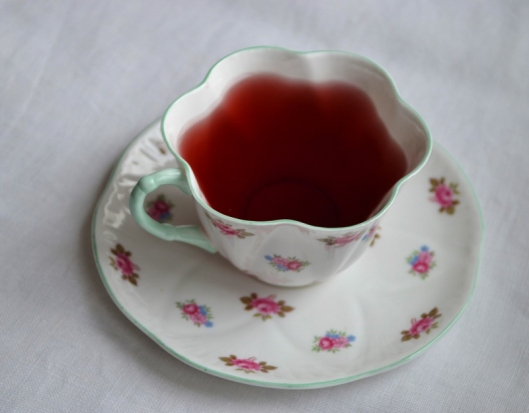 Day 4 – Organic Silk Dragon Jasmine is a green tea from the Jiangxi and Fujian Provinces in China. The caffeine level is moderate. While scented delicately with jasmine flowers, it has a bitter taste which increases as it cools, even after the leaves have been removed. It also has a very bitter aftertaste. I do like, however, that this is a Fair Trade tea.

As lovely as this post-holiday treat is to the senses (read the descriptions, marvel at the colours, savour the tastes and smells), it’s the gift of community and friendship that blesses me most. In this job (like most jobs), I sometimes see the best and the worst in people. But in the words of the Beatles, “I get by with a little help from my friends”.

And tea….don’t forget the tea.