This is the city. I live here. I work here. A lot of people live here and a lot of people die here. One day, I will die here…most likely at the wheels of…an idiot driver.

And when it rains, when it snows, when visibility is at Absolute 0%, like worms to a puddle, they come crawling into my path. And I die a little inside.

I’ve written about them before. The Champagne Corolla. The perky Blonde. The daily Terror in the school parking lot. 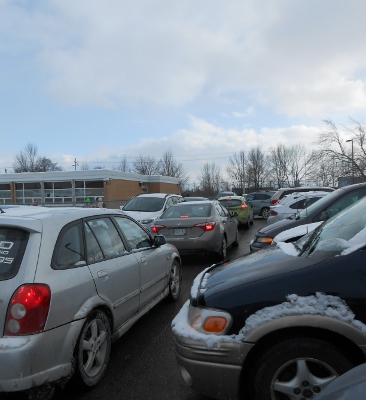 Frustrated (in the school parking lot)

I’m surprised my youngest son’s first words weren’t “you moron”! I try to exercise control when I’m behind the wheel, both of the vehicle and my mouth, but they make it.just. so. hard.

Oh, yes, I’ve written about them before, but not like this.

You see, yesterday was a typical gray winter’s day. It had snowed in the night so the roads were wet and slick. Soft, fluffy flakes were gently drifting down. And we were running late, as usual. The school parking lot was its usual death-defying experience (who needs extreme sports – I get my adrenaline rush every morning between cup of tea one and cup of tea two)! Then there was the Black BMW who objected to me only going 15 km/hr over the speed limit (we all know about black BMWs). And the white mercedes that decided to change lanes without signalling, despite the fact that my passenger door was nearly parallel to her driver door. You know…speed demons, lane-switchers, stop-sign rollers, and the ones who wave at you. Typical morning.

I stopped for a hot cup of tea and a bag of chips (don’t judge me!) at the gas station across the road from work. I was still griping and grimacing in my head the whole time. When I went to the leave, the station had suddenly become a major hub of activity, and I was late for work… I had had enough. I got in the car, drove the short distance to work (getting waved at by the person who though my left turn lane was a drive-thru, in the opposite direction). “What an idiot!”, I thought, as I pulled up to the mail box. “Moron”, I muttered, shaking my head as I pulled up to the front door of the building. I turned the car off and sighed loudly, reached for my cup of tea…which was strangely absent…

“A taste for irony has kept more hearts from breaking than a sense of humor, for it takes irony to appreciate the joke which is on oneself.” – Jessamyn West

I had driven off…with my cup of tea on the roof of my car. It was somewhere between here and the gas station I could easily see to my right.