This morning, the blogsphere will begin to be flooded with posts related to the newest Star Wars movie. Discussions on which movie was the best in the franchise? Original versus the second generation? Discussions on the actors, the costumes, the special effects, the storyline? Little bits have been spilling out since the announcement was made to silence the rumours that a new Star Wars was “in the works”. Facebook teasers have been posting every few weeks. The television is filled with ads. It’s even in places I didn’t expect it…

In the grocery store:

Even at a friend’s house: 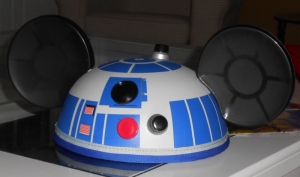 Guess what was the band’s closing song at the school holiday concert I endured enjoyed this week?

This morning, my co-worker will drag himself to work because he went to the midnight showing of this movie.

And I will laugh at him.

I could have gone with him (although I wouldn’t have been sitting with him). But I chose instead to sleep!

That’s because I’m getting old!

Sure, it would be cool to tell my grandchildren (I’m still hoping…) that I was among the first to see it in a midnight showing. But will they really care…? By then, now that Disney is involved, there may be 14 Star Wars movies and the magic will be gone.

And I will still be old!

So for those of you who want to expound upon every little detail for the next 40 years:

May the Force Be With You!

I’m going to sing the theme song loudly and cheerfully throughout the rest of my day…BECAUSE I GOT A GOOD NIGHT’S SLEEP!

“ “The Dark Side of the Force is the pathway to many abilities some consider to be… Unnatural.” – Senator Palpatine