We met Dan, one of 8 Lego Master Builders in the world. And yes, everything was awesome! Except for my hair…I was too lazy to shower Saturday morning and chose instead to slap on a scarf as a headband and keep my head down…What were the chances that I would run into anyone important…

Little Guy, Big Guy and I ventured to our local big chain book store Saturday afternoon, totally unaware that a Lego event was about to take place, an event that had sold out days before. When we walked in the store, Little Guy was offered a free golden ticket. He wasn’t sure he wanted it but it wasn’t hard to talk him into it. If I was between the ages of 8 and 14, I would have snatched it in an instant.

Excitedly, we lined up at the back of the store with the other excited parents…and their kids. Little Guy kept flashing me disdainful looks, but I was behaving. I only grinned at him from ear to ear every time he did it…he didn’t know that all he had to do was smile back and I would leave him alone!

We were escorted into the Lego domain by good-looking, college-aged students in bright yellow aprons and given a plastic baggie to fill with our supplies. Two tables filled with bins of yellow, white, blue and black Lego stretched across the room, and each bin had a number to tell us how many pieces of each to put in our baggies. Then we were escorted to a table with instructions to build a Lego book.

Little Guy was almost finished his book when the big announcement came. “Ladies, Gentlemen and kids of all ages – please join me in welcoming Dan, Master Lego Builder”! The music swelled and we all cheered. Dan, a mild-mannered 50ish man in a blue lab coat, welcomed us and showed us some of the things we could build with the pieces we were given. Then we were encouraged to “get building”.

In less than 30 seconds, Little Guy was done his book and we lined up to meet Dan. He got his book signed but declined to get his picture taken. If I was having a better hair day, I would have volunteered*. It was awesome! 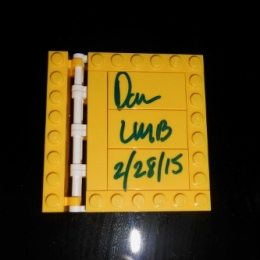 *please keep in mind I just spent a week popping cold medication, and cooped up in the house with a quarantined child who never stops talking…playing Minecraft!

1 thought on “Everything was Awesome!”