Yesterday would have been my grandparents’ 64th wedding anniversary. I can’t imagine being married to the same person for 64 years!!! Seriously, think about it: 64 years of sharing a tiny bathroom with one sink, 64 years of fighting over life’s little irritations, 64 years of washing his “tighty-whiteys”…and I could go on and on and on….

My Grandpa met the love of his life in the new school teacher across the road, and was soon stopping in at the one-room schoolhouse on the way to take the cows out to pasture and sending love notes to the school with his little sister. His little sister was so embarrassed. She’d quickly put the note on the teacher’s desk and run away, but peeked through the window to make sure the teacher had found it.

Grandpa had a farming accident on the day he planned to propose and he lost the sight in one eye. He asked his little sister if his sweetheart would want to marry him with only one eye? It was always a solid “yes”!

They were married at home on a hot July day. Grandpa worked in the fields, bringing in hay in the morning, before he had to travel in the car to pick up some relatives. At Grandma’s place, there was a flurry of activity. The sandwiches had been made the night before and stored in the basement to keep them cool; the butter and milk spent the night in the well. Grandma wore a pretty wedding dress and a very long veil, and she carried a dozen “American Beauty” red roses. Grandpa wore a dark suit and Grandma can remember him sweating heavily under the photographer’s bright lights. He looked so handsome with his very full head of hair!

A couple years ago, my Grandma was singing in the church choir. I happened to glance over at Grandpa, and there he was, with a silly “love-struck” grin on his face and pride in his eyes – that was his sweetheart singing, and he didn’t have eyes for any other girl! It was a moment that brought tears to my eyes and I had to look away – it was an intimate for him.

Every year, he’d attend a local country fair, and every year he wanted to put his name in for the Longest Married Couple, but both he and Grandma had to be present, and she didn’t feel like sitting on a wooden bench in the heat to get a piece of paper and a ribbon. Last year, we talked her into staying, but he was too shy to put his name in, so I used my “million dollar” personality, and I did. They won, by a year. Grandpa was SO proud! In fact, the fair certificate and ribbon were in his hospital room. 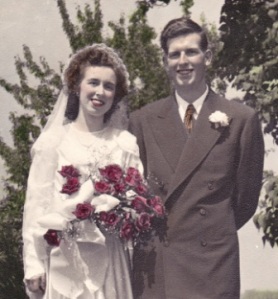